Happy New Year! I hope everyone had a great holiday season full of family, friends, and fun. I know I did!

This year for the holidays, I made Nick a new pair of pajamas! I realized that I did not alter the pattern from the last time that I made these for him, so I had a lot of fabric to remove, since the pattern is tall enough for me and has enough extra on the bottom of the shirt, that it could almost reach his knees before hemming. (I’ll have to remember to alter this for next time.)

For this new pair, Nick had some requests. Since I’ve made poor buttonholes in the past, he requested that I not give him any functional buttons. Unfortunately, he wouldn’t have been able to get them over his head, so he had to have at least one button that was real. Because of the sewing classes that I just took, that one button is the best buttonhole that I’ve ever made. It even stays closed! So amazing…

He also requested that I make him a mandarin collar, which I have never made before. After looking at photos of collars online, I freehand cut the collar that went with original pattern. I think it actually turned out good. This set was an improvement on the last few pairs I’ve made for him. Hopefully the next pair will be high enough quality that it could compete with a store-bought pair. 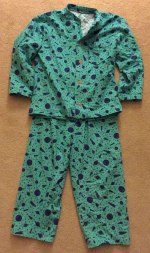